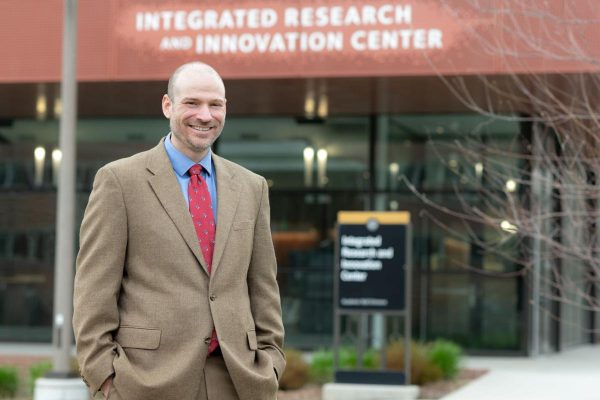 Thank you to reporter Kyle Pfannenstiel for highlighting some of U of I’s COVID-19 modeling efforts, as originally published in the Post Register.

If you’ll be at the dinner table with people you don’t live with this week, research from the University of Idaho can help you gauge how likely you are to bump into someone who has COVID-19.

In Bonneville County, for instance, 1 in 16 people are likely actively transmitting coronavirus, according to estimates Monday morning. In Madison County, that’s about 1 in 10.

Exposure risk is incredibly high, according to health officials, hospital administrators and experts who are pleading with people to practice safety precautions such as masking and distancing if they choose to gather with extended family and friends during Thanksgiving. Last week, the Idaho Falls Fire Chief said the region’s largest EMS system was on “razor’s edge.”

“We’re trying to express things in ways that might relate to people a bit more,” project director Benjamin Ridenhour, a U of I mathematics professor, said of his team’s map.

Determining risk is hard. One way is through rates of spread in an area — calculated by averaging the number of new cases, each week, and dividing that by a region’s population. That’s how most national virus trackers do it.

Or, as Eastern and Southeastern Idaho Public Health districts do, you could determine how many cases are suspected to be active.

Both those measurements don’t include people who have COVID-19 but don’t get tested.

Ridenhour said that “silent” COVID-19 population — asymptomatic people, and people with such minor symptoms they don’t get tested — account for much of the virus’ spread.

“There’s a range of symptoms from being asymptomatic to being life threateningly sick,” Ridenhour said. The Centers for Disease Control says about 40% of all people with the virus don’t ever show symptoms. Ridenhour said “only a small portion of those cases are you going to pick up in surveillance.” That’s because although testing has expanded significantly, “it doesn’t change the fact that you have this huge group of people … who are not going to get tested.”

The U of I exposure risk map is based off a national modeling effortfrom Georgia Tech University researchers. That map lets users plug in the size and location of a gathering to show the odds that someone will have COVID-19 there.

At a gathering of 15 people in Bonneville County, there’s a 52% chance that someone will have COVID-19, according to Georgia Tech estimates on Monday.

These risk displays only say the odds of someone having the virus. They don’t predict the likelihood of spread, nor do they account for whether masks or distancing will be practiced at an event — all things that can significantly reduce the risk of spreading the virus.

Research from the U of I pandemic modeling team comes through a supplemental grant from the National Institutes of Health. Originally, the new modeling team had a five-year grant from NIH for around $11 million. But as the pandemic began, NIH gave the team around $500,000 more to model COVID-19 in rural communities.

“The first focus was on urban communities because that’s where the first outbreaks were,” said principal investigator Holly Wichman, a U of I biology professor who directs the university’s recently started modeling center. New York and Seattle were some of the nation’s first hotspots. “I think people in rural communities felt pretty safe. They felt like … they were naturally isolated; they were naturally distancing. But over time, as the virus spreads into these communities, they’re in some ways less prepared to deal with it.”

The exposure risk map isn’t the only tool the U of I team is working on. Others include a forecast of Idaho’s COVID-19 virus progression, along with a survey on behaviors in rural communities that can help test what resources can help curb virus spread.

About Us, COVID-19, Research Projects

This article was written by Alexiss Turner, Marketing and Communications Manager from the College of Engineering, for the recently published “Here We Have Idaho” magazine. IMCI and many of our faculty participants have been very involved in the COVID-19 pandemic response. We are proud to be part of the many research efforts campus-wide that continue to help ensure the health and safety of Idaho residents. Read the article in its entirety here.

As the global coronavirus (COVID-19) pandemic continues to impact Idaho, experts across the University of Idaho have united to bring innovative solutions to Gem State communities in need and help ensure the health and safety of Idaho residents…

A Cure Through Defense

A research team in the Department of Biological Sciences is working to develop a one-size fits-all drug that could protect human cells from many coronaviruses, including the one responsible for COVID-19.

“Humans have similar genetics,” Department of Biological Sciences Virologist and Assistant Professor Paul Rowley said. “From the point of view of a human protein, a targeted drug therapy could be a universal solution.”

The COVID-19 virus attaches to a human cell using spike proteins that have evolved to dock with the specific ACE2 receptor. Once attached, the spike protein begins transferring genetic material to the cell, tricking the cell to generate more virus.

Rowley is working with Jagdish Patel, a College of Science molecular modeling specialist and research assistant professor, and others to use computational modeling to virtually sift through millions of molecules and optimize existing drugs to identify potential inhibitors that could shield the ACE2 receptor, preventing the virus that causes COVID-19 from docking in the first place.

“By using a computational 3-D map of this human cell receptor, we can determine which virtual molecules, out of thousands, would bind strongly,” said Patel. “Using chemistry and physics-based algorithms, we can rank the binding and visualize the molecule on the computer to see how they bind. The strong binders — which bind as intended — will be purchased and sent to Dr. Rowley’s lab for empirical testing in the fall.”

Working collaboratively with researchers in the Institute for Modeling Collaboration and Innovation has helped the team earn funding needed to keep research developing through the summer and fall semesters.

About Us, COVID-19, Research Projects

Congratulations to IMCI participants on their recent publication in PLOS Medicine. The following news story was produced by the Mountain West News Bureau. View the original article here.

A newly published study out of the University of Idaho suggests that the higher perceived risk of a disease, the more likely someone is to vaccinate.

The researchers surveyed about 2,400 people back in 2018, and the analysis of those answers shows that perceived deadliness played a big role in vaccination decisions.

Participants were randomly given different hypothetical disease scenarios, and, as a news release explains, “vaccination willingness was greater for participants who were given information about the potential deadliness of a disease, versus those told how severely it could impact daily life.”

It also found that certain demographics – like those with higher incomes, older people and men – were also more willing to vaccinate.

University of Idaho philosophy professor Bert Baumgaertner, who co-authored the study, said another factor was at play, too – politics.

“Especially the very liberals and the very conservatives, they actually behave quite similarly in terms of how their ideology seems to be influencing their decisions,” Baumgaertner said.

Essentially, they both stuck to their guns regardless of the risk, with conservatives less willing to vaccinate and liberals more willing.

There are caveats, though: This survey didn’t measure for changes in confidence around a vaccine’s safety. It was also done with hypothetical diseases, not the one everyone is focused on right now: COVID-19.

Still, according to the study, “This information can be helpful for campaigns that aim to reduce vaccine hesitancy and is useful for modeling feedback between human decision-making and the spread of disease.” 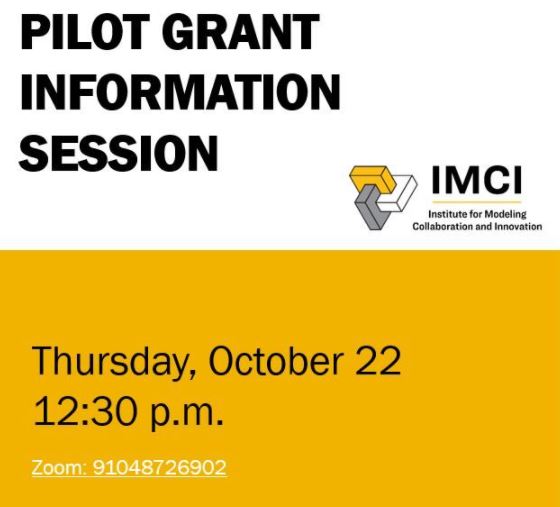 For future reference or if you weren’t able to attend the Brown Bag Lunch yesterday, here are the slides presented by IMCI Director Holly Wichman regarding our Pilot Grant program. Please remember, you are welcome to reach out to the leadership team directly and at any time if you have questions about whether your research fits within the goals and objectives of IMCI.

Download slides from the Information Session held on Oct. 22, 2020.

Animals’ Susceptibility to Coronavirus Subject of U of I Research

The following article highlights research funded through IMCI. The original news release was written by Ralph Bartholdt in University of Idaho Communications and Marketing.

MOSCOW, Idaho — Sept. 17, 2020 — Whether coronavirus can use farm animals or North American bats as intermediate hosts to spread the novel pathogen SARS-CoV2 is being explored by three University of Idaho researchers.

At his lab on the Moscow campus, Paul Rowley, a virologist and assistant professor in the Department of Biological Sciences, is using mammalian cell cultures and a viral agent similar to coronavirus to get to the bottom of the question.

“We already know that humans can infect cats and other animals,” Rowley said. “We’re interested in learning what animals are susceptible and if there’s a risk of SARS-CoV2 jumping into the bat population in North America, or domestic cattle or livestock.”

Aided by a federal grant, Rowley has teamed with U of I Research Assistant Professor Jagdish Patel, a molecular modeling specialist, and James Van Leuven, research assistant professor, to identify animal populations that are likely susceptible to the pandemic.

Ferret farms in Europe this year were shut down and the animals killed because of SARS-CoV2 infections, Rowley said. And civet cats — a weasel-like animal related to the mongoose — were partly responsible for the SARS outbreak of almost 20 years ago.

“Those populations could potentially act as viral reservoirs and could initiate new disease outbreaks,” Rowley said.

Viruses are submicroscopic bundles of genetic material that cannot replicate without first invading a host cell. Once inside a cell, viruses such as SARS-CoV2, the coronavirus responsible for the global pandemic, multiply and can make us sick.

Instead of working on treatments to kill SARS-CoV2, Rowley, Patel and U of I Department of Physics Professor Marty Ytreberg, began last spring to locate cell doors — called receptors — that allow viruses to board and invade a cell.

If the researchers find a way to block receptors that allow SARS-CoV2 to penetrate a cell, they could effectively halt the spread of the virus. Determining the animal receptors that enable SARS-CoV2 cell entry will benefit both human and animal health, Rowley said.

So far, scientists have learned that livestock is not as susceptible to coronavirus as humans, he said.