Note: This pilot grant evolved out of the research produced by the working group, Evolution of Tandemly-Replicated Opsin Genes: Molecular Models that Predict Spectral Shifts.

Vision is one of the most sophisticated biochemical system in humans and serves as a primary environmental input. In other organisms, it is the dominant sensory modality for foraging, predator avoidance, and social behaviors including mate selection. Understanding this complex system requires input from a variety of scientific fields. Human visual perception is initiated when light strikes rod and cone photoreceptors within the retina of the eye. Visual pigments (VPs) with distinct peak spectral sensitivities (λmax) expressed in separate rod and cone photoreceptor populations transmit differential input to retinal neurons. The cone VPs (SWS1, SWS2, Rh2, LWS) are responsible for color perception, whereas the rod VPs (Rh1) are responsible for the perception of objects under dim light condition. A VP consists of a chromophore and associated opsin protein, and its sensitivity to individual colors, i.e., λmax of VP is determined by chromophore type (11-cis retinal or 11-cis 3,4-dehydroretinal) and the opsin amino acid sequence. Minor differences in opsin sequence can result in large changes in λmax and/or result in anomalous visual function.

Direct and accurate prediction of λmax from opsin sequence was not possible until recently when we developed a molecular modeling approach for a small number of teleost Rh2 cone opsins (https://journals.plos.org/ploscompbiol/article?id=10.1371/journal.pcbi.1005974) and Rh1 rod opsins (https://science.sciencemag.org/content/364/6440/588)  Our approach overcomes several limitations of previous methods and provides a glimpse into underlying mechanisms for a small set of rod and cone opsin variants. In spite of this step forward, there is a significant gap in our understanding of genome to phenome relationships in opsins. Filling this gap has the potential to fundamentally explain λmax, basic “rules” through which opsins evolve novel functions, the molecular basis of missense variations that can lead to vision deficiency and provide a platform for engineering the opsin with desirable characteristics. Currently, our group is interested in expanding our molecular modeling-based approach to other class of opsins and investigating underlying mechanism of missense variations affecting opsin function.

Project Team: James T. Van Leuven, Emma Altman The microbial communities colonizing animal guts are highly influential to host health and development. Animal hosts are impacted by the species of microbes present and temporal changes in their abundances, but the forces governing these dynamics are poorly understood. Bacteriophages modulate bacterial community composition through predation. They […]

For future reference or if you weren’t able to attend the Brown Bag Lunch yesterday, here are the slides presented by IMCI Director Holly Wichman regarding our Pilot Grant program. Please remember, you are welcome to reach out to the leadership team directly and at any time if you have questions about whether your research […]

The University Awards for Excellence recognize and encourage excellence in all forms at the academic level. Recently, the 2019 Interdisciplinary Award was presented to the Flow Ventilators Team for their collaborative efforts for working to improve treatments for asthma and other lung diseases. Team members include 4 researchers from 2 colleges: Tao Xing, associate professor […] 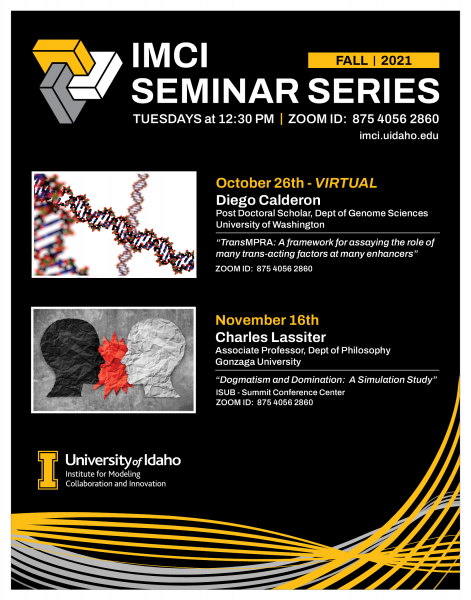