Congratulations to IMCI participants on their recent publication in PLOS Medicine. The following news story was produced by the Mountain West News Bureau. View the original article here.

A newly published study out of the University of Idaho suggests that the higher perceived risk of a disease, the more likely someone is to vaccinate.

The researchers surveyed about 2,400 people back in 2018, and the analysis of those answers shows that perceived deadliness played a big role in vaccination decisions.

Participants were randomly given different hypothetical disease scenarios, and, as a news release explains, “vaccination willingness was greater for participants who were given information about the potential deadliness of a disease, versus those told how severely it could impact daily life.”

It also found that certain demographics – like those with higher incomes, older people and men – were also more willing to vaccinate.

University of Idaho philosophy professor Bert Baumgaertner, who co-authored the study, said another factor was at play, too – politics.

“Especially the very liberals and the very conservatives, they actually behave quite similarly in terms of how their ideology seems to be influencing their decisions,” Baumgaertner said.

Essentially, they both stuck to their guns regardless of the risk, with conservatives less willing to vaccinate and liberals more willing.

There are caveats, though: This survey didn’t measure for changes in confidence around a vaccine’s safety. It was also done with hypothetical diseases, not the one everyone is focused on right now: COVID-19.

Still, according to the study, “This information can be helpful for campaigns that aim to reduce vaccine hesitancy and is useful for modeling feedback between human decision-making and the spread of disease.”

A team from the College of Science wants to improve the restraint devices used during injections of the greater wax moth larvae, a common laboratory animal. Injecting laboratory animals can be dangerous for researchers due to accidental needlesticks containing pathogenic microorganisms. In PLOS ONE, the team published designs for two new devices that reduce the handling of the larvae, protect against accidental needlestick injuries and maintain a high rate of successful injections. The devices are being used in the Rowley lab to help develop novel antifungal drugs to fight invasive fungal disease.

Why R0 Is Problematic for Predicting COVID-19 Spread

Dr. Benjamin Ridenhour, Assistant Professor in the Department of Mathematics and Statistical Science and IMCI modeler, recently made significant contributions to an article in The Scientist, a magazine for life science professionals:

In the meantime, epidemiologists are reckoning with the uncertainty around SARS-CoV-2’s biological parameters by assuming a range of values rather than fixed numbers, says University of Idaho epidemiologist Benjamin Ridenhour, who is helping state officials predict the spread of the virus. He’s placing confidence intervals around every biological parameter in his model. His R0 could be anywhere from around 1.3 to 4, he says. “That way, obviously the chances that anything you model is exactly correct are zero, but hopefully you can capture it in that range somewhere.”

College of Science faculty Jessica Lee, Siavash Riazi, Shahla Nemati, Jannell Bazurto, Andreas Vasdekis, Benjamin Ridenhour, Christopher Remien and Christopher Marx had a paper published in PLOS Genetics. In their research, they uncovered that genetically identical cells can be phenomenally different in their ability to survive stress, and thus selection acts upon the distributions of phenotypes without leading to genetic changes. They also found that stress tolerance changes with the environment, and there is even a form of memory that takes place as a result. These phenomena are being discovered in many realms, including cancer, where there are often “phenotypic mutations” which may seem like genetic change, but are not. This study opens the door to studying the entanglement of Darwinian genetic evolution with Lamarckian phenotypic evolution. Read the full article. 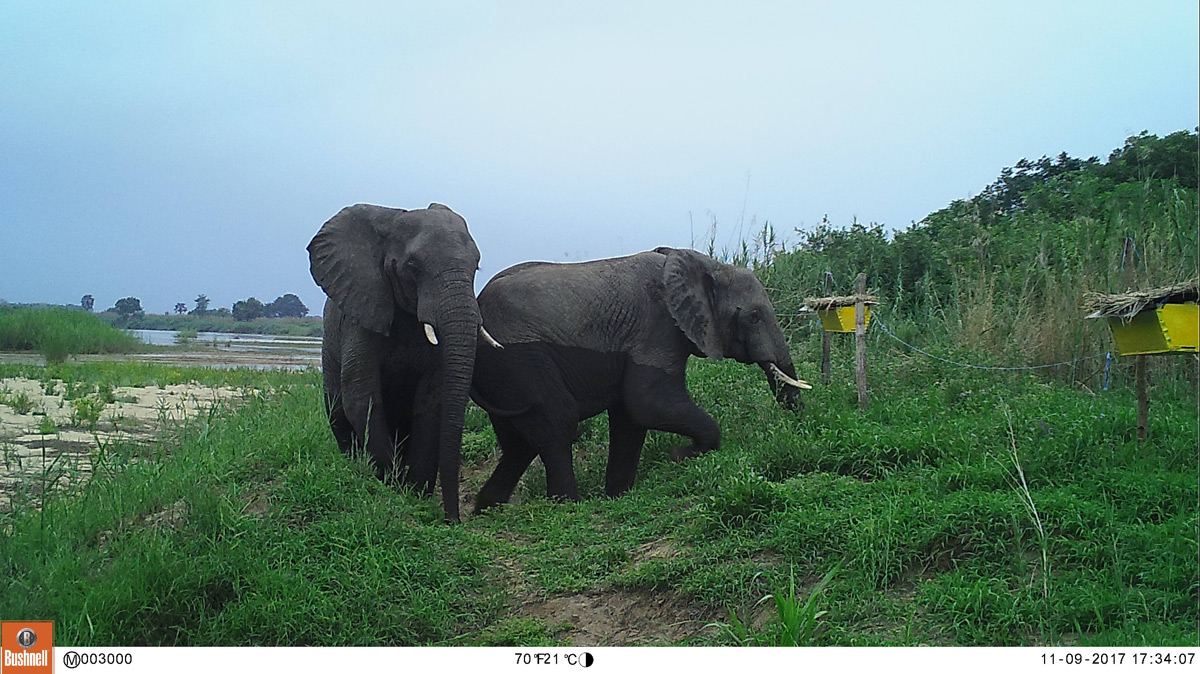 This article was written by Leigh Cooper in University of Idaho Communications and Marketing. View the original article here. While IMCI was not involved in the funding of this research project, we are are thrilled to count Dr. Ryan Long as one of our participating faculty.

MOSCOW, Idaho – October 17, 2019 – A University of Idaho-led team of researchers found that experimental fences reduced the number of times elephants left Mozambique’s Gorongosa National Park to raid nearby crops by 80-95%; beehive fences appeared to be the most effective at deterring crop raiding while also providing a revenue source for neighboring villages through the production of honey.

The team’s evaluation of various fencing strategies for discouraging crop raiding by elephants outside Gorongosa was published today in Conservation Letters.

Crop raiding by wildlife results in billions of dollars in economic losses globally and threatens wildlife conservation efforts by creating negative human attitudes toward wildlife. Human and wildlife conflict can be exacerbated near protected areas like Gorongosa National Park, where the elephant population has risen to roughly 600 after falling by more than 90% during a civil war in the 1970s-90s.

“The better the elephant population does, the more animals leave the park and raid crops. That becomes a legitimate issue for the people living near the park as they are mostly subsistence farmers,” said Ryan Long, a U of I assistant professor and a lead researcher on the paper. “Negative interactions can lead to elephants being killed by people, or people being killed by elephants.”

Long, master’s student Paola Branco and colleagues tested the effectiveness of different fences at discouraging elephants from leaving the park. The study area incorporated four communities along 11.6 miles of the Pungue River, which marks the park’s southern border. The team fenced 13 of the 18 elephant river crossings in the study area. They used multiple fence types including beehive fences — free-swinging hives connected with twine — and chili fences — woven fabric soaked with chili-infused vegetable oil.

The beehive fences appeared to be the most effective deterrent — a 95% reduction in crossings was observed — although the small sample size didn’t allow for statistical differentiation among fence types, Long said. The study indicates various fences can reduce crop raiding, and working with local communities to modify animal behavior and human attitudes simultaneously can mitigate human and wildlife conflict.

“To be effective, mitigation must be affordable and maintained locally. There must be an incentive to maintain them, and they need to improve the perception of wildlife by locals,” Long said. “We picked these fences because, first, it’s cost-prohibitive to create a physical barrier to stop the largest land mammal on Earth, especially across a large area. Secondly, there’s intrinsic motivation for the communities to maintain these fences over the long term, both for the purpose of deterring elephants and for the purpose of producing a marketable product, honey.”

The initial cost of fence construction was borne by the park and donors, while local communities were responsible for maintenance and harvest and sale of the honey. A beehive fence with 15 hives, like the ones used in the study, can generate from two to four times the current minimum annual wage in Mozambique. Based on the study’s results, the Conservation Department of Gorongosa is now deploying beehive fences at crossings all along the Pungue River.

This project was funded under National Science Foundation award 1656642. The total project funding is $700,000, of which 100% is the federal share.

About the University of Idaho

The University of Idaho, home of the Vandals, is Idaho’s land-grant, national research university. From its residential campus in Moscow, U of I serves the state of Idaho through educational centers in Boise, Coeur d’Alene and Idaho Falls, nine research and Extension centers, plus Extension offices in 42 counties. Home to nearly 12,000 students statewide, U of I is a leader in student-centered learning and excels at interdisciplinary research, service to businesses and communities, and in advancing diversity, citizenship and global outreach. U of I competes in the Big Sky Conference. Learn more at uidaho.edu